Unplanned power cuts can instantly plunge you into darkness, Emergency Lighting is essential to illuminate your safe exit route under these conditions.  In the event that power supplies are down and you find you and your staff in an emergency situation, such as a fire, your emergency lighting should kick in to provide suitable illumination so that people can evacuate the premises safely.  As part of health and safety protocol, employers are required to carry out Periodic Inspection and Testing of their emergency lighting in accordance with the requirements of  BS 5266-1:2016 which our electricians can carry out for you and advise you if any improvements are required to make the installation safer, too. 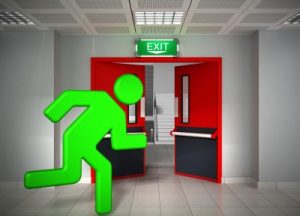 Emergency Lighting is Your Friend

Firstly, imagine that you are happily working in your place of business, firing of a series of emails as you have a deadline to reach.  Unbeknownst to you, a blazing fire in the basement (started by a partially lit cigarette butt) has created a power outage.

Without warning, you are suddenly plunged into the depths of pitch-black darkness.  The panic mount and then fire alarm sounds continuously.  The heart races wildly.  The screams of colleagues pierce the emptiness and the sound of galloping feet feel as if they are heading towards you like a stampede.  The thick plumes of smoke are like wily shapeshifters as they find their way into your office through every crevice, growing in size.  An acrid, bitter taste enters your mouth and you find yourself coughing incessantly.  You scramble and stumble in the dark, trying to reach out for a fire extinguisher but to no avail.  It becomes apparent that the frenzy will not abate and no light will penetrate the darkness and restore calm.  Your only hope is that the fire services make their way to you soon.

This worst-case scenario is a chilling example of danger, darkness and panic that could happen without emergency lighting.  Emergency lighting is a mandatory system of back-up illumination which, in the event of a disruption of the electrical supplies, such as a fire outbreak or power cut, emergency lighting will automatically be activated and facilitate the safe exit of occupants in a building. Some Emergency lights contain their own integrated back-up battery supplies which are continuously charged.  Should a disruption to main power or lighting circuit occur, the luminaires will illuminate for approximately three hours to assist safe evacuation.  UK legislation demands that all commercial, occupied buildings have sufficient illumination (minimum of one lux) to enable people to vacate safely in an emergency situation.

Not only is functional emergency lighting a legal requirement, it is also the moral, right thing to do. On the 26th April, 2007, the New Look flagship store in Oxford Street, London, was singled out in the news for safety management incompetence as the branch did not deliver in terms of its risk assessment and training to staff; it had inadequate emergency exits (fire door mechanisms fitted to the wrong side of the doors); and failed to follow fire alarm protocols.

According to an eyewitness, who was a shopper present at the time said the fire alarm went off “intermittently”.  For some time since the alarm sounded, shoppers were allowed to continue their shopping and it was only when passers-by alerted those inside and smoke emerged from within, that evacuation happened.

The company was ordered to pay a record fine of £400,000 for fire safety breaches.  In the words of the presiding Judge Geoffrey Rivlin QC, it could have been “a disaster almost too awful to contemplate”.  Miraculously, despite shattered windows, falling shards and enveloping thick smoke, no one was harmed.

To conclude, I would like to leave you with two vital questions: Do you have fully functioning emergency lights? Is your emergency lighting up to scratch?  Failure to comply could result in human tragedy.  At ACtest, we are happy to collaborate with you in order to find solutions and help you manage risk successfully.